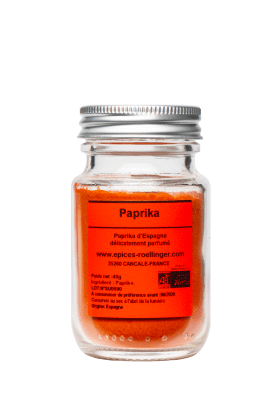 As a young boy, I was lucky to have been able to visit Hungary and taste the famous dish of goulash, made fragrant by this coral-hued spice. The introduction of this fiery condiment to central Europe fascinated me. In fact, five different types of paprika exist, with differing levels of strength and aroma. The semi-hot variety is the most common in Europe. Paprika goes well with legumes and shellfish, as well as cheese.

Capsicum annuum szegedense solanaceae americane
A flamboyant spice derived from the Hungarian pepper brought by the Turkish soldiers in the 17th century, who were crazy about it, as most of the Islamic peoples were, the Moroccans having adopted it first. The earliest bell pepper plants were brought to Europe from the New World by Christopher Columbus. In Spain, paprika is referred to as “pimentón”.

Christopher Columbus was the first to bring this devilish spice back to his queen, Isabel the Catholic of Castile. Transported east by Magellan´s expedition, chili peppers had much more success in Asia than in Europe. So much in fact, that until the nineteenth century, it was widely held that chili originally came from the East Indies, and even today many people still think that capsicum is originally from India. Although the different species all come from Central America, there are now hundreds of cultivars. These can be found throughout the world and chili peppers have become a staple of the cuisines of hot countries, from Cayenne in French Guyana and Mexico, to southern China, Africa and the Caribbean.