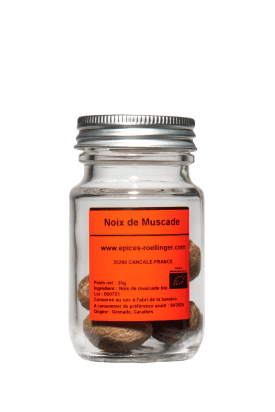 With its richness, warmth, and hint of sweetness, this whole nutmeg from Grenada has a round, sensual flavor profile.

Recommendations Nutmeg is a sweet, mild spice that goes well with dairy and butter-based recipes (bechamel/white sauce, lemon butter), egg dishes (omelets and soufflés), potato dishes (mashed, au gratin, shepherd’s pie), cauliflower preparations, creamed spinach, and meatballs. Both nutmeg and its sister spice, mace, are used to flavor vermouth and provide a fragrant counterpoint to cocktails like Planter’s Punch and Brandy Alexander.
Whole nutmeg is rock-hard and needs to be grated with a fine nutmeg or cheese grater.

After 8 years of negotiations and several on-site visits, we are thrilled to offer this certified organic whole nutmeg from Grenada (Caribbean) which hails from a single-family farm.

This exceptional nutmeg thrives in a grove perched atop the volcanic hills of the island, 1000 meters above the sea that stretches below. It is a paradise on earth filled with fabulous nutmeg trees, some of which are over 50 years old and 20 meters tall. We have become friends with the family that tends the grove and lovingly cares for its beauty and biodiversity via organic and agro-ecological practices.

In cooking, nutmeg pairs especially well with dairy, cream, and egg-based preparations as well as potato and cauliflower recipes. It adds an interesting note to seafood, particularly when used to season a broth (nage) or lemon butter. We also love it in honey-scented cakes, poached pears, and berry compotes. Nutmeg also has a natural affinity for lemon and vanilla.

Nutmeg is the nut-like kernel of the fruit of the nutmeg tree, myristica fragrans. The pretty, yellow apricot-like fruit yields two different spices: nutmeg (the kernel) and mace (the veil-like aril that covers the whole nutmeg). Europeans long thought that nutmeg and mace came from different plants all together.
It takes 9 months for the fragrant, delicate, yellow nutmeg flower to develop into a fruit which splits open when fully ripe. At this point, the fruit, hanging as high as 10 to 20 meters up in the nutmeg trees, is shaken down with sticks so it can be gathered from the ground.
The nutmeg kernel and mace are then extracted from the fruit (which is used to make jellies and jams). The mace arils that wrap around the nutmeg kernel must be removed the day the fruit is harvested while they are still red and supple. As mace cures, it hardens and takes on an orange hue.
The nutmeg kernel is encased in a shiny brown protective shell. This shell is left intact during the 2-month drying process and subsequent storage. The shell is then cracked open to reveal the pale brown whole nutmeg kernel inside.


Nutmeg was first discovered on the Banda Islands by the Portuguese in 1512, long before the Dutch conquered the archipelago in 1602. In fact, the indigenous spice’s other name is ‘Banda nut.’ The highly coveted spice was at the root of a war between several different nations. To maintain their monopoly on the nutmeg and mace trade, the Dutch ensured that the carefully guarded Banda Islands were the only region where nutmeg trees could grow, destroying any specimens found elsewhere. No means were too extreme when it came to keeping the price of nutmeg high on the international market; the Dutch even went so far as to dip the nutmeg kernels in lime to prevent them from germinating. The Dutch nutmeg monopoly lasted until the 18th century, when Pierre Poivre and Mahé de la Bourdonnais, an explorer from Saint-Malo, succeeded in smuggling a few nutmeg and clove seedlings out of the Dutch colony to plant them on the French-owned Mauritius Islands and in French Guiana.
In 1810, the English took control over the Banda Islands and held them for seven years before they were reclaimed by the Dutch. During that time, the English were able to gather nutmeg seedlings which they exported to India, Sri Lanka and Grenada. The English planted nutmeg trees on Grenada Island in the middle of the 19th century. Little by little, local farmers turned their efforts to nutmeg farming as sugar cane plantations became less profitable.
The French word for nutmeg, muscade, comes from the word musc’ (musk) because nutmeg was used to scent clothing trunks. The French had a particular penchant for nutmeg, while the English and Dutch tended to prefer mace in their cuisines. Nutmeg was used abundantly in 18th century French cuisine and gentlemen used to travel with their own personal nutmeg grater.


Nutmeg was one of the most expensive spices available, and, according to one story, an honest Englishman was said to have been able to buy a mansion in London with a small bag of nutmeg.