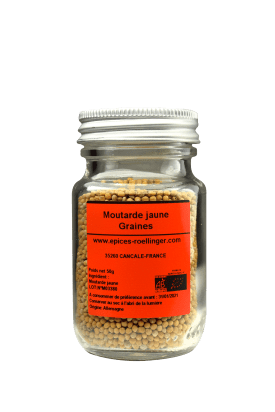 Mustard was already known in ancient times both for its revulsant properties in medical use and for its qualities as a flavouring in cooking, I use it in different ways in cuisine.

I particularly like mustard in a vinaigrette with potatoes and cod, or simply in a salad dressing for tomatoes. But also with the jus from a shoulder of lamb. And on bread topped with grilled mackerel. Mustard is generally delicious mixed into the cooking juices of a roasted fish, the ultimate being monkfish brushed with mustard, accompanied by chestnuts - a Breton speciality. Like the English, for once, I also think it goes well with ginger and turmeric.
The story of mustard cannot end without this verse :
"three things God warns us against:
salted beef without mustard,
a valet who admires himself,
a woman who paints her cheeks".

It belongs to the genus Sinapis of the cruciferous family. This annual plant grows wild along our paths and cliffs. Two types of mustard are cultivated: white and black. The black seeds come from the Sinapis Nigra plant, originally from Europe and now cultivated around the world.
Once the seeds have been ground, a flour is obtained which, when mixed with water, creates a very acrid volatile essential oil. The seeds themselves have practically no flavour, but a chemical reaction with water creates a metamorphosis of flavour and aroma. This almost diabolical transformation is due to none other than allyl sulfocyanate.... White mustard comes from the Synapis Alba, which is common throughout Europe. Its bright yellow flowers fill the fields between May and July. Some farmers give this plant to their cows to impart a sunny yellow colour to their butter. It undergoes the same transformation as its black relation once it has been ground and mixed with water, but its essence is weaker and less acrid, although sharp. Mustard also grows wild among other crops and on the roadside.

Mustard was already known in ancient times both for its revulsant properties in medical use and for its qualities as a flavouring in cooking. During the Middle Ages, it was already considered essential with salted meats.
The various mustards prepared as condiments in different countries can be made with white or black seeds, but from India, Romania or North America. Mustard used to be grown in Alsace and in the Eure et Loire. Vinegar, salt and water and used to soften their tegument. This shell is then removed or not to create a smooth or grainy mustard. Today, mainly the white seeds are used to make commercial mustards. The black seeds are difficult to harvest, since their pods open as they ripen.