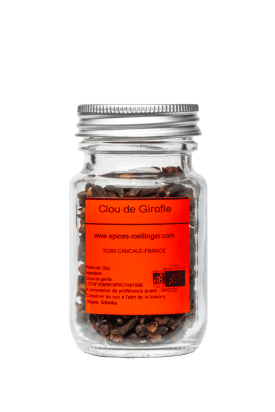 The unique aromatic flavor of cloves is due to a highly scented oil rich in eugenol, which gives its warm, sensual aroma. For centuries, people have stuck cloves into lemons or oranges as a way of perfuming a room. In cooking, cloves go well with all members of the onion and garlic family, and are an indispensable ingredient in court bouillon and fish stock. They bring an elegant touch to curries when married with pepper, nutmeg, cinnamon and ginger.
Closes have been used in Chinese, Indian, European cuisines for centuries because of their antibacterial and antifungal properties.

Cloves are the flower bud of the beautiful tropical tree, Eugenia caryophyllata, which can reach heights of some thirty feet. The cloves are picked by hand and dried in the sun, when they quickly take on their characteristic brown color.

Cloves were considered highly mysterious for centuries because of their shape and their powerful flavor, not to mention their place of origin, the far-distant Moluccas. For centuries they were so rare that they exchanged hands for astronomical sums, far higher even than the staggering prices paid for nutmeg or saffron. In the Middle Ages, some people even believed that they grew in the earthly ruins of the Garden of Eden…
In 1512, the Portuguese had absolute control over the supply of cloves for the best part of a century. Lisbonne became the principal trading center for cloves, breaking the monopoly of the Arabs and Venetians. However the Dutch were eager to break into the highly lucrative market, and soon wrested the monopoly from the Portuguese. Cloves became more widely available as the price fell by more than half. But they were well aware that it was in their interest to keep prices high, as with nutmeg. To maintain a high price, they set up one of the earliest international financial speculation.
Once more, it was the Frenchmen Mahe de la Bourdonnais and Pierre Poivre who managed to steel seedlings from under the noses of the Dutch, and plant them in French colonies with similar climates like the famous pamplemousses gardens in Mauritius.