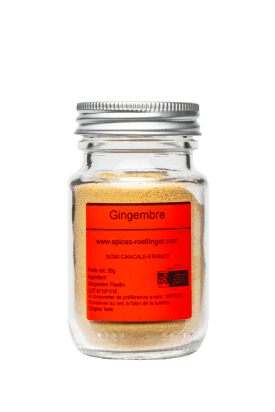 Ginger has long been a staple ingredient in Indian curries, Berber cuisine from North Africa, Chinese sauces, Japanese vinegar, and British beer and desserts. I like using ginger in sauces such as the stock in which I steam mussels, my nage sauce for lobsters, and fish sauces. I also find it makes excellent ice cream.

Ginger is the rhizome or underground stem of the plant zingiber officinal, which is a member of zingiberaceae family. The finest ginger is called three “fingers”, which quality depends on how the rhizome is prepared. The best ginger comes from carefully selected rhizomes that are simply peeled, washed several times, and dried. This uncoated ginger is almost white in color.

Ginger is thought to take its name from the district of Gingi, near pondicherry. Ginger comes from an elegant plant, rather like an iris, which is native to southern India.It has been used in China for more than fifteen centuries. The Persians introduced ginger to Europe through their trading links with Greece and for twelve centuries after that, ginger was imported into Europe by Arab merchants.
Ginger was widely used during the Middle Ages because it was much cheaper than pepper till the price of pepper dropped in the course of eighteenth century.