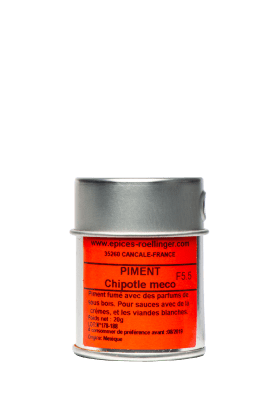 These strange, light-brown and morel-like 10 cm long chilis are in fact smoke-dried jalapeños.

Chipotle Meco are only mildly hot. Their rich aroma and flavour are reminiscent of forest mushrooms, with an extraordinary finish and roundness. They have an oaky character with just a light trace of wood-smoke. Chipolte Meco chili is similar in flavour the best malts of Islay, with their smoky aromas of peat, mushrooms, and seaweed.
A generous pinch of Chipotle Meco goes perfectly in cream sauces for white meat and poultry, but also at the end of cooking, in roasted veal, pork or chicken jus. A pinch in a chocolate mousse also gives a pleasantly surprising result.

Christopher Columbus was the first to bring this devilish spice back to his queen, Isabel the Catholic of Castile. Transported east by Magellan´s expedition, chili peppers had much more success in Asia than in Europe. So much in fact, that until the nineteenth century, it was widely held that chili originally came from the East Indies, and even today many people still think that capsicum is originally from India. Although the different species all come from Central America, there are now hundreds of cultivars. These can be found throughout the world and chili peppers have become a staple of the cuisines of hot countries, from Cayenne in French Guyana and Mexico, to southern China, Africa and the Caribbean.