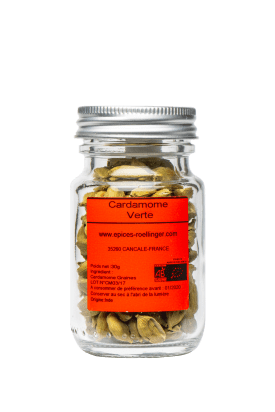 The sensation of freshness that it creates in the mouth has made it irreplaceable since ancient times.

If we had to assign a colour to each spice, some would think of cardamom as being a deeper and stronger green than that of mint. Giving an impression of great freshness in the mouth and through its aroma, this little seed is one of my favourites.
My preference is for the seeds of Kerala. I have a passion for this flavour, but be careful, it can overpower a dish. I like to use it with or instead of ginger, particularly to flavour seafood bouillons and fish in its own stock. You can grind the whole pods in a coffee grinder, but it is better to sift this powder. It´s present in a number of Indian and Asian spice mixes, particularly curries and masale.
Personally, I prefer it with milky tea with cinnamon and ginger, a drink the Indians appreciate at any time of day.

From a botanical point of view, this rhizome from the Zingiberaceae family falls into two species, elettaria and amonums. The first are present in India and grow more specifically on the mountains of the Malabar coast - the plants grow in the wild. The harvest of the pisiform fruits takes place twice a year. The Zamonums grow mainly in Cambodia, and in the heights of Tonkin they are a source of revenue for the small population of "Pohls" who tend to veritable wild gardens. In both countries, the fruits are harvested mature, then washed and dried in the sun.
This spice has rich medicinal properties, particlarly for heart problems. It is also often present in toothpastes.

These seeds with a penetrating flavour have been appreciated since ancient times in China and India. They were considered a panacea against a number of illnesses, particularly dysentry. The Arabs brought them back from the East, and the Jewish people, then the Greeks and Romans, adopted them.
Cooks in Europe had almost forgotten this seed; only the Scandinavians continued to rely on it for their breads and cakes, and maybe in a few German provinces it has also been used in charcuterie.